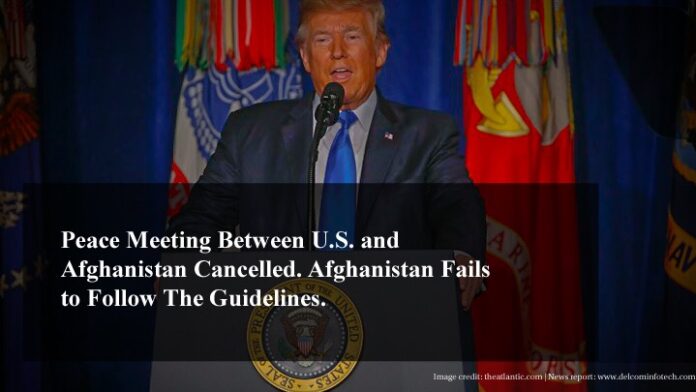 Mr. Trump cancels the historical meeting with Taliban that was believed to end America’s 18-year war in Afghanistan.

In a recent tweet, Mr. Trump mentioned that he was all set to meet the President of Afghanistan, Mr. Ashraf ghani and senior taliban leaders. The agenda of the meeting was an attempt to resolve the existing issues between U.S. and Afghanistan.

However, the secret meeting that was supposed to take place on Sunday 09/08, was supposedly cancelled at Mr. Trump’s Camp David retreat after the Afghan militants confessed their involvement in killing a U.S. soldier in a recent yet fatal attack.

Taliban’s response to Trump’s decision was a bit ridiculous. “Americans will lose the most for cancelling the meeting” – Response from Taliban.

The meeting between the two nations was planned to take place a few days before 9/11, to establish peace and obtain settlement.
As history presents the events, U.S. invaded Afghanistan in 2001 with the attempt to overthrow the Taliban government.

This event primarily took place because the Taliban militants were harboring Al-Qaeda which was planning to attack the U.S. as we saw 9/11.

Even though the meeting was called off by President Trump, the office of Afghan President Ashraf Ghani recognized and praised the “sincere efforts” of the U.S. as an attempt to establish peace between the two.

This planned meeting would have one of the most significant moves by the U.S. President Donal Trump and especially if it ended with peace between the two nations. It would have been a remarkable moment in world history, particularly just days before the 18th anniversary of 9/11.

President Trump said in a recent tweet and BBC News reported – “Unfortunately, in order to build false leverage, [the Taliban] admitted to an attack in Kabul that killed one of our great great soldiers” the president tweeted.

“I immediately cancelled the meeting and called off peace negotiations.”

As per the Secretary of State Mike Pompeo, the secret meeting to be held at Camp david was in the works for a while before it got called off.

“I think as you saw, if the Taliban don’t behave, if they don’t deliver … the president of the United States is not going to reduce the pressure,” Mr Pompeo said. As BBC News reports.