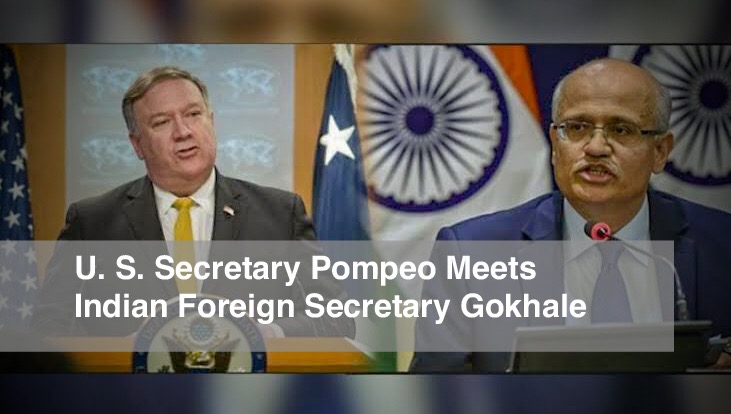 NEW YORK: On Monday March 11, 2019, U.S. Secretary Michael R. Pompeo met with the Indian foreign secretary Vijay Gokhale. The meeting took place after the intense phase of tension between India and Pakistan. Following the issue, secretary Pompeo affirmed that the United States of America stands with the people and government of India in this battle against terrorism.

The meeting between Secretary Pompeo and Foreign Secretary Gokhale, discussed the relevance of bringing those responsible for the terrorist attacks to justice. The discussion between the two also urges Pakistan to take strict action to demolish the the terrorist infrastructure and not shelter the terrorist groups in its territory.

The strength between India and U.S relations led to discuss significant ways to further develop cooperation, including counterterrorism. The two leaders also discussed U.S – India defense cooperation and emerging U.S – India economic partnership with the joint efforts to expand bilateral trade in a balanced and all the more rational way. Gokhale in response to Pompeo’s reference to bilateral trade matters, conveyed India’s sincere engagement with the United States for a mutually acceptable conclusion on the trade front. According to U.S State department spokesperson, Pompeo’s role is described as “essential” in pacifying tensions between India and Pakistan.
Gokhale is in Washington DC for major discussions on U.S – India strategic relations.