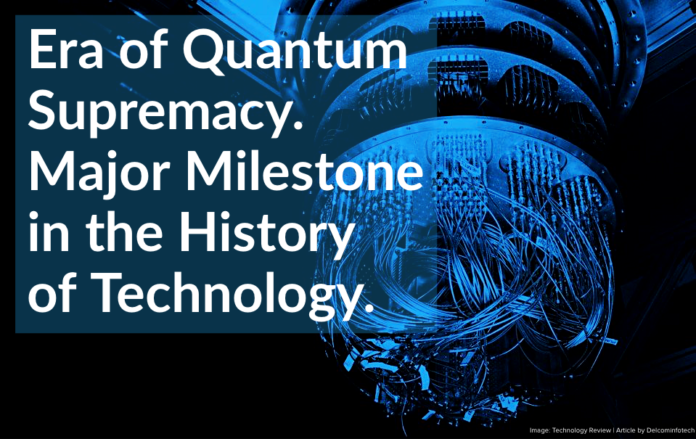 Ever imagined what it’s like to have computer systems that performs tasks that would take the supercomputers 1000s of years to complete, in just 200 seconds? Well, probably won’t be around to see those tasks completed but Google’s new Sycamore Quantum Processor did it in this lifetime. We have finally stepped in to the era of Quantum Supremacy.

It’s been decades since computer scientists and engineers have been working on creating quantum computers. But what exactly is a “quantum computer” ?

Quantum computing is the area of study focused on developing computer technology based on the principles of quantum theory, which explains the nature and behavior of energy and matter on the quantum (atomic and subatomic) level.

In simple terms, quantum computing is a faster way of performing computer related tasks. This is a milestone bigger than any tech company has ever achieved in the field of computers and softwares.

A generic computer works based on units called “bits”. Bits contain a numeric value of either 0 or 1, resulting in fast computer operations. Here’s how quantum computers are different – Quantum system work on units called “qubits”, short form for quantum bits. As opposed to bits, qubits contain numeric value of both 0 and 1 at the same time. This results in extraordinarily fast computer operations.

Qubits allows many and multiple operations to take place simultaneously, however it has to be synchronized using quantum effect popularly called “Entanglement”. This results in a more linear pattern of operations allowing smooth flow of binary codes at faster speeds.

“It’s an impressive device and certainly an impressive milestone. We’re still decades away from an actual quantum computer that would be able to solve problems we’re interested in,” Prof Jonathan Oppenheim, from UCL, who was not involved with the latest study, told BBC News.